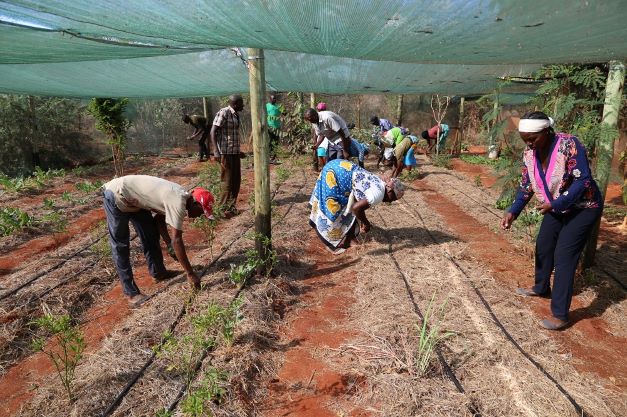 All of the work that we do here at the Tsavo Trust would not be possible without the incredible support that reaches us. We know that our work is important, that without the conscious and continuous presence of organisations such as ours, the natural world would be in danger of falling lowly on the totem pole of human priority.

We, as a species, hold such wide-reaching influence over the natural world that this cannot be. Without human vigilance, without a desire to protect wild spaces, we will lose them. It is an inevitability.

Of our each incredibly important partners, the IUCN and the European Union are some of our better known. With their support, their backing and their expertise, we are presently involved in several, varied initiatives that focus on one of the emergingly important issues facing wildlife conservation.

Increasingly, the conversation amongst conservationists centres on the mitigation of Human-Wildlife Conflict (HWC). Despite that the trade in illegal ivory maintains a robust network of buyers and traffickers – you can read more on that here –, poaching for ivory is at a record-low here in Kenya.

This is incredible news. However, it poses new challenges and we’ve recently been concerned with highlighting them. We will, hopefully, have continue to face the happy issue of elephant population recovery. These populations are already in competition with human beings for space. As they grow, this issue does too.

In our latest article, we discussed one of the initiatives we are presently working on to ensure cohabitation is peaceful. Our 10% fence plan, supported by the IUCN’s Save Our Species programme and the European Union’s international projects department, aims to ensure communities living in and around the Tsavo Conservation Area do so with access to necessary food security.

The 10% fence initiative is a great project and we have expanded on it’s design in many of our previous bulletins. We, as a result, will not go into any greater detail here.

However, our recent article, in which we discussed community work with the Kamungi and Shirango peoples that neighbour us, generated some always-encouraging stakeholder interaction. As conservationists, and as part of a wider community, we know that our work depends on transparent conversation and close ties between all those that are concerned.

Resultantly, we wanted to give a follow-up article to our previous one. We hope the extra information added here, keeps those that are interested in elephant conservation abreast of the work we do with our neighbours here in the TCA.

Regular readers will know that our closest neighbours, and most helpful local actors, come from the Kamungi and Shirango communities here in Tsavo. Currently we have managed to erect our 10% porcupine fences around 12 farmsteads within the Kamungi community.

We have also, together, erected a long Human-Elephant mitigated conflict-reducing fence through the Kamungi conservancy. Our estimates suggest that this fence protects over 7000 people living between Mtito Andei and Athi River from conflict with wildlife.

As well as the building of shrewdly-placed fencing in order to protect human communities, we strive to ensure that there is a mechanism in place for these neighbouring stakeholders to profit from wildlife protection. We currently employ 36 permanent employees from the Kamungi and our operating budget for work with them is $75,000.

Much of that money goes toward community building projects, to generating and maintaining employment prospects, in transport costs and other educative projects.

With the Shirango people, our work is gradually building. We are trialling the 10% fence farmsteads with them presently and 14 members of this community are permanent Tsavo Trust employees. Within the Shirango community, we intend to spend $60,000 this year.

The Tsavo Trust’s operational proficiency depends on intelligently-designed interplay between many different teams. Our Super Cub aircraft are incredibly helpful in surveying the vastness of the TCA quickly and with minimal impact on the land and creatures beneath.

However, the influence our aircraft pilots have on conservation efforts depends on the efficiency of ground teams. We are very fortunate in being able to draw on the support and expertise of Kamungi and Shirango members. Our scouting teams are all comprised of local actors who know and understand the TCA better than any.

We are a product of each and every team-member’s commitment. From the one-time donor to our Kamungi and Shirango scouts, every individual and interacting corporation plays its part. Our scout teams are a great example of this interplay. In fact, each of our Shirango scout teams are sponsored by the IUCN’s SOS programme and by the European Union.

It is only through international alliances such as these that we will see successes in the ongoing issue of elephant conservation.