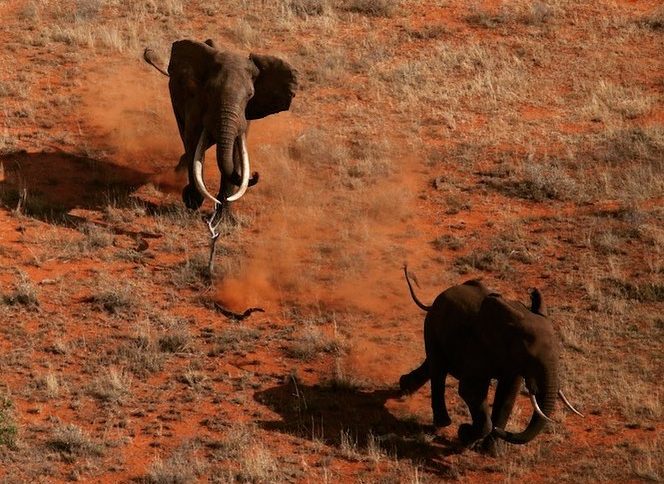 As a conservation not-for-profit organisation based here in Kenya and concerned with protecting African elephant, we consider ourselves privileged whenever our articles mention the words ‘population recovery’. Recently, we took a look across the border to see how elephant conservation was going in Tanzania and were encouraged by the positive anti-poaching results being reported there.

Tanzanian governmental announcements, backed up by findings made by a London-based NGO concerned with building a comprehensive picture of where elicit ivory comes from in Africa, suggest that in Tanzania poaching has dropped significantly since 2015. If you want to read more about Tanzania and its reported successes in this sphere, you can do so here.

The news coming out of Tanzania is encouraging. So much so that it has prompted us to take a deeper dive into the state of African elephant continent-wide. Conservation has been the defining buzzword of conversations about African elephant for decades. Ever since we arrived, however belatedly, at the conclusion that the species was in serious danger of going extinct.

What’s more, it has been more than a buzzword. We have been trying to protect these creatures for decades now. With many successes reported on, we wanted to attempt to answer the question as to whether African elephant populations are increasing or decreasing.

Attempting to get a continent-wide survey is very difficult. Every ten years the IUCN attempts its African Elephant Species report. The report looks to assess the status of the species as a whole and it draws on evidence from a number of sources – dung analysis, aerial surveys, etc. – to complete its picture.

It provides the most accurate and reliable information on the distribution and scope of Africa’s elephant population. It is, however, far from comprehensive. Surveys of this scale are incredibly difficult to conduct. As Kenya’s first national wildlife census proves, a lot of organisation and funding is necessary and still, despite any organiser’s best efforts, difficulties abound.

Much of Africa is thickly forested. Much of what is thickly forested runs off or climbs steep hills. Often these areas are inaccessible by road and difficult to survey from the air. To compound matters, there are areas, destabilised by conflict, that are made inhospitable to humans by other humans.

Furthermore, the IUCN status report’s latest edition, 2016’s, is now six years out of date. In that time, we’ve seen many positive and influential developments in the sphere of elephant conservation.

In order to try and build a picture that is more up-to-date, we’ve taken a look at national government reports, findings from international bodies and news reports.

What was the status of Africa’s elephant populations in 2016?

When the IUCN did their last status report, they estimated that there were 415,000 elephant in Africa. This marked a 93,000 decrease from the amount of elephant discovered for the 2006 status report. That was despite that the 2016 number included 18,000 elephant individuals discovered in a previously uncounted population. The real decline over those ten years is considered at around 111,000.

(It should be noted that the species report allowed for a potential 117,000 to 135,000 elephant individuals that may exist in areas not systematically surveyed).

At the time of this report, international agencies were reporting on a general decline in poaching numbers continent-wide. However, there were countries, Tanzania most prominent amongst them, that were bucking the general trend.

East Africa had witnessed a nearly 50% reduction in its elephant population over ten years. The IUCN stated, in their 2016 report, that this was largely due to Tanzania’s 60% elephant population decrease and that Kenya, Uganda and Rwanda had reported stable or growing populations.

In 2016, Southern Africa, which is home to most of the world’s African elephant, was not considered badly affected by poaching. Southern African countries were then home to 70%, or 293,000, of Africa’s elephant population and the population sizes there were considered stable.

West and Central African countries are home to the smallest elephant populations. Central Africa was, in 2016, considered home to 24,000 elephant, that’s 6% of total elephant population. West Africa was home to 11,000, or 3%. They are, however, home to most of the world’s recently reclassified African forest elephant and though they were not so badly impacted by poaching between 2006 and 2016 as East Africa was, it was still a large problem.

What has happened to Africa’s elephant populations since 2016?

In 2019, the United Nations Environment Programme reported that “poaching levels in Africa have dropped in the past eight years.” This is backed up by analysis made by the WWF who stated, in a winter of 2018 article, that “elephant poaching in Africa is trending downward”.

The WWF analysis even reported that, in East Africa, poaching was witnessing “significant declines”.

Poaching’s decrease in East Africa is perhaps explained largely by Tanzania’s successes in getting its poaching problem in hand. If you want access to a detailed account of how Tanzania got a handle on poaching, you can do so here. Suffice it to say here that the successes were drastic.

Between 1998 and 2014, 87 tonnes of ivory seized by international bodies could like the confiscated ivory to Tanzania. Between 2015 and 2019, less than five tonnes were linked to Tanzania. The Environmental Investigation Agency (EIA), a London-based NGO, concluded that “Tanzania now is no longer seen as a major exit for ivory.” This is obviously a huge coup for the wildlife services of Tanzania and for the various NGOs that worked to aid their work. What’s more, the government says that the elephant population size is growing in Tanzania. 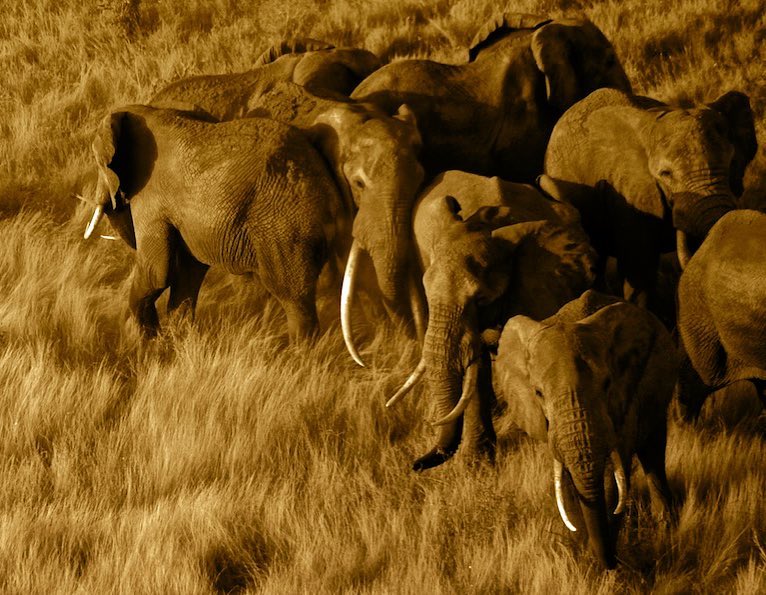 According to a presidential statement, the Tanzanian elephant population size grew from 43,000 to 60,000 between 2014 and 2019. This number has not been verified by international surveyors. The Kenyan government has, similarly, reported on population growth. Kenya’s 2021 national wildlife survey counted over 36,000 individuals.

If these numbers are accurate, between the two East-African nations, some 96,000 elephant are extant. That is already an increase on the 2016 estimate of 86,000 for the whole of the region, and it does not include figures from Burundi, Uganda and Rwanda, nor the figures from the Horn of Africa nations.

The organisation wrote that Southern Africa’s “[s]avanna elephant numbers have also been stable or growing for decades especially in the Kavango-Zambezi Transfrontier Conservation Area”. The Kavango-Zambezi transfrontier, or KAZA, is an enormous area of protected land, twice as large as the United Kingdom. It lies in the Kavango and Zambezi river basins and comprises land in Angola, Botswana, Namibia, Zambia and Zimbabwe.

In 2019, the UNEP report mentioned earlier stated that, by then, “the regions with the highest poaching rates are West and Central Africa”. The EIA echoed this analysis in 2020, suggesting that “poaching had shifted from East Africa to Central and West Africa”.

With Southern African territories maintaining their low-poaching rates and the Tanzanian government’s remarkable turnaround on that front, the hotbed of African elephant poaching shifted westward.

Home to Africa’s smallest and most fragmented African elephant populations, this is a worry. Even more so because West and Central Africa are host to nearly all of the African forest elephant. Africa’s elephant were recently reclassified into two distinct species.

The forest elephant is shorter than it’s savannah cousin, has rounder ears and is easily recognised by short, pointed tusks. It also has a longer gestation period. Adapted to life in dense woodlands, this species is considered to be under far greater duress than the savanna elephant.

The majority of these creatures live in Gabon and the Republic of Congo and, for these populations, habitat loss is of larger impact. These shy, forest-dwellers live in increasingly fragmented habitats as logging and human development cut forests into smaller and smaller parts.

There is also evidence to suggest that the denser ivory of the forest elephant is easier to carve and thus more desirable as a tradable commodity.

Stemming the illegal trade in elephant ivory has seen some successes in recent years. Poaching rates, continent-wide have dropped and there have been some noteworthy victories. Tanzania’s curbing of the practice is perhaps the most exciting of those success stories.

Resulting from the continued good work done by the wildlife services and NGOs of East and Southern Africa, elephant population sizes, by in large, are growing.

However, the threat, as it always does, has changed. Ivory markets remain robust. Despite that there was seemingly a downturn during the pandemic, international analysts have predicted a post-COVID boom to the ivory market.

With the shift of poaching’s focus from East Africa, the already vulnerable forest elephant is at greater risk. Unfortunately, little is known of this recently reclassified species and so it’s numbers are undetermined. We may have to wait for the next IUCN species status report for more detailed information.

What’s more, poaching may be on the decrease and population’s may be recovering but there is some distance to go before elephant populations ever approach their 20th century levels. And, if that time ever comes, we will have much to do to ensure that this recovery dovetails well with increasingly widespread human settlements.