Tsavo Trust works in partnership with the Kenya Wildlife Service (KWS), through a valid Memorandum of Understanding (MOU) covering several programs and objectives across the Tsavo Conservation Area (TCA) including enhancing aerial and ground operations as well as wildlife monitoring with a special emphasis on Tsavo’s iconic “Super Tuskers”.

Following the death of the iconic Tusker known as “Satao” in May 2014 (via a poachers poisoned arrow), the Tsavo Trust established a mobile Tusker monitoring ground unit called Tembo 2 team in October 2014 as a follow on to Tembo 1 ground unit (established in June 2014).

With additional funding support the Tsavo Trust has established and deployed a further 2 more mobile field based monitoring teams – Tembo 3 and Tembo 4 teams. For the reasons shown above this is a vital extra component in order to tackle the ever-growing pressure on elephant populations but also essential if the big Super Tuskers of Tsavo are to survive and pass on their unique and rare ivory genes to further generations.

In June 2014 Tsavo Trust employed 4 scouts who worked alongside the 10 man KWS Platoon (Dakota Base) and in so doing provided further “eyes and ears” on the ground and strengthened man power during field patrols. Whilst they were in deployment between June 2014 and March 2015 several snares and poachers were arrested both inside the National Park and on surrounding community lands. Sadly, this unit was disbanded due to funding shortfalls, but by September 2016, it had become urgent that funding support to re deploy and further enhancing this team was necessary in order to effectively dominate this locality against the current poaching threat.

This unit became known as “Tembo 1” meaning elephant 1. In September 2016, a request for funding was made by Tsavo Trust to re-establish the Tembo 1 team to continue the partnership with KWS on this important de-snaring role (1 head scout, 1 driver, 2 scouts plus allowances for 4 KWS Rangers), purchase a new 4 x 4 vehicle for their logistical support (field deployments, water delivery and so on), purchase the basic anti-poaching field equipment necessary (tents, radio’s, binoculars, GPS, camera, uniforms, food ration supplies, vehicle running costs) to make a significant impact in combating this poaching threat to elephants in particular and addressing the bushmeat poaching along the southern boundary of Tsavo East National Park from Bachuma in the west to Sala Gate in the east. Funds were raised thanks to a number of generous donors, and Tembo 1 was re-deployed in 2016. The unit has been on continuous deployment since 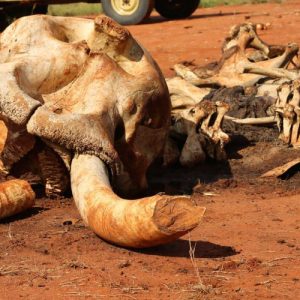 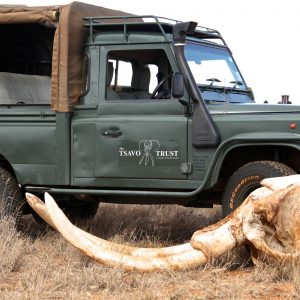 Tembo 2 team is not directly involved at the sharp end of anti-poaching, but more alongside KWS Research and Monitoring Departments within the TCA, mainly in Tsavo East National Park (TENP). The main emphasis here is to monitor the large Tuskers as often as possible in-situ on the ground and frequently in tandem with aerial activities whereby ground deployments can be guided. In so doing a layer of “eyes and ears” at ground level is achieved to compliment the “eyes in the skies” under the aerial unit.

A combined ground and air project has proved to produce far better monitoring results and in turn provides greater security for the big Tuskers. For example in September 2014 there were only 14 different observations made of Tuskers (12 known individuals) yet in September 2015 there were 62 different observations made consisting of 10 iconic bulls, 4 emerging bulls and 3 iconic cow Tuskers. Within the TCA only 10 remaining big iconic Super Tuskers exist (those with ivory to the ground and over 45kg each tusk), a further 16 emerging bull Tuskers and 7 iconic cow Tuskers known and recorded to date.

Tembo 2 team consists of 3 Tsavo Trust men, led by 1 Field Officer (holds a degree in wildlife management), 1 driver and 1 Field Assistant (all of whom received elephant identification training by Save The Elephants in Northern Kenya in September 2014). In addition at least 2 KWS field research staff makes up the complete Tembo 2 team, who conduct field-monitoring patrols on a daily basis in TENP.

The Tembo 2 team currently provides the only platform available in TENP Research Department for meaningful field data collection to KWS (presently there is no vehicle or resources at KWS’s disposal) and this reflects the importance of the Tembo teams to Park Management. As well as big Tusker monitoring, this on-going project also contributes valuable data on endangered and threatened species including the Hirola or Hunters antelope (Beatragus hunter, Endangered), Grevy’s Zebra (Equus grevyi, Endangered); African Wild Dog (Lycaon pictus, Endangered), Cheetah (Acinonyx jubatus, Vulnerable), Hippopotamus (Hippopotamus amphibious, Vulnerable) and Lion (Panthera leo, Vulnerable) – thereby adding value to any investment in this project as well as an excellent example of where Government/Private conservation partnerships exist.

Through the consistent findings of the aerial unit combined with the Tembo 2 team, the Tsavo Trust maintains a database on relevant information gathered pertaining to the big Tuskers. This information has been collected since the Tsavo Trust BTP began in January 2013.

Until The Tsavo Trust Tembo 3 Team was deployed, Tsavo West National Park (TWNP – 9,500 square kilometers) did not have a ground-based team to monitor the big Tuskers. This was a must and deployment of Tembo 3 to TWNP working on the same basis, as Tembo 2 in TENP was made in 2016.

At the request of KWS, a second Tsavo Trust Research and Monitoring Team, called Tembo 4, was established to relieve some of the pressure on the Tembo 2 team who attempted to cover TENP (12,000 square kilometers). Tembo 4 was deployed in August 2017, an is the second Tembo monitoring team operating in Tsavo West, and on exactly the same basis as Tembo 2 who operate in Tsavo East.

Kamungi Scouts work closely with Tembo 5 operating mainly in the Tsavo West “Triangle” area and in the Kamungi Conservancy on the northern boundary of Tsavo East National Park.

Table below shows the capital expenditure and running budget to set up and maintain an additional Tembo team (Tembo 3 or Tembo 4):