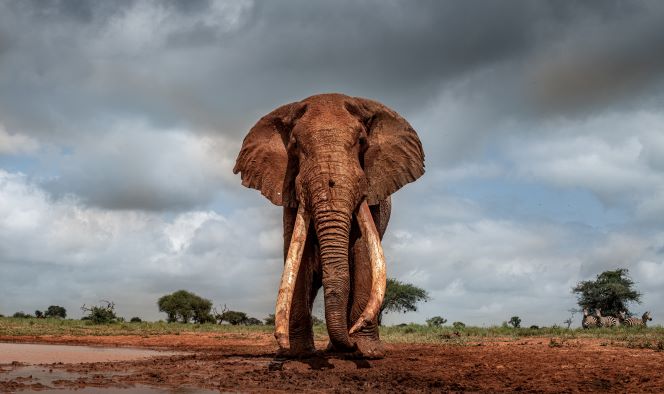 Tsavo has recently lost two of its star attractions. In Dida and Lugard, the Tsavo Conservation Area had two icons that could drag tourists and filmmakers to the area. Once here, touro-dollars and documentarians did so much for the conservation of Tsavo’s elephant populations.

Losing these two incredible creatures is sad. They did, however, live long, organic lives. They died of natural causes even if an influencing factor was undoubtedly the lengthy drought conditions in whose grips we still remain.

After the death of Dida, as a kind of obituary, we wrote an article on what elephant behaviourologists believe they know about how elephant’s mourn. The article, with its focus on commemorating the life of Dida, naturally focussed on how the death of an influential member impacts the close ties which bind family groups.

Much of what we know of elephant social ties is based on research done into family groups. The female-dominant family unit, led by a matriarch, is the best-known example of an elephant’s social group. It is also the easiest to study. It is dynastic and can often exist under the same leadership for many years.

As a result, through study of the family unit, we’ve been able to glean limited information about what it takes to keep a group together. By comparing which family units break apart and which don’t, scientists believe they have an understanding of what characteristics define a successful elephant matriarch.

This, in turn, has helped us build a picture of the influencing factors in elephant social dynamic building.

Why is there less known about the social impact of bull elephant?

The study of elephant males as they relate to society has, by comparison, been less fruitful. Male elephant leave their family units as they arrive at sexual maturity. They join a far looser conglomeration of individuals and the ties they can make in this new dynamic are more flexible and less easy to study. Despite that this makes for a dramatic shift, study on males social ties is harder to be concrete about.

Elephant males leave the close-knit bonds of their family unit and, as adults, begin to either roam alone or join up with other males in what has occasionally been called bachelor herds.

This myth has been used as justification for the hunting of old bulls. Interested parties would have us believe that old bull elephant bring no influence to bear on elephant societies. They would suggest that their death is no huge loss to the elephant they leave behind.

This myth has slowed down the pace of our drive to understand elephant social ties but new research suggests that, in fact, male elephant are important, in their own way.

Bachelor herds do have leaders, and lasting friendships

Investigators monitoring elephant on the route between Makgadikgadi Pans National Park and the Boteti River in Botswana noted how younger males tended to follow older bulls along the route. It is considered a difficult passage for elephant and lone individuals are known to struggle along it.

The researchers surveyed all the elephant that passed between these two points and found that adolescent males travelling along on this route were more infrequent than was expected. Instead, younger males tended to band together behind an older, more experienced bull in order to make the trek.

This, the researchers suggest, offers us a limited insight into the roles older bulls will occasionally play. One of the researchers, a Connie Allen from Exeter University, stated that their findings “suggests younger, newly independent, adolescent males target these [older] individuals for their heightened social and ecological knowledge.”

Bonds formed, often on lengthy treks such as these, can, the researchers say, lead to lasting ties between males. These bonds are the subject of frequent tests, however. All-male herds break up and reform regularly and reproductive dominance, established by musth cycles, puts strain on relationships.

Despite this, long-standing friendships between unrelated males have been observed.

There is a story that circulates amongst those conversing about elephant populations here in Kenya. It is the story of the orphaned male elephant who were introduced to Pilanesburg’s protected area in South Africa.

These young males killed more than 40 white rhinoceros between 1992 and 1997. Often these killings happened during the elephants’ time in musth. They coincided with these males allegedly ripping up more trees than was usual amongst elephant populations elsewhere.

Rangers and conservationists couldn’t work out why the young males were doing this. It was, quite obviously, untypical behaviour from elephant males. And it couldn’t be stopped.

Until, that is, six older male elephant from Kruger park were introduced. The arrival of these more mature elephant completely put to a stop the spate of violence and elephant deforestation. Without necessarily forming bachelor herds, the presence of these six older bulls tempered the behaviour of the adolescent males.

This story, which you can read more about here, is an important one in helping us understand what role bull elephant play in the wild. Though the closeness of their ties to other elephant individuals may not be apparent, old these males are an important totem in elephant society’s hierarchy.

Fortunately for the elephant in Tsavo, there are many that will look to fill the footprints left behind by Lugard. The elephant population here is healthy, well-balanced and growing. Sad as his loss is, elephant society here will not fall into the anarchy observable in 90s Pilanesburg with his departure.