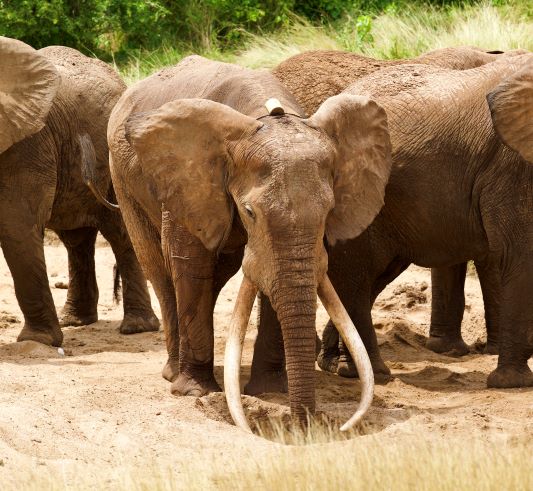 The November/December period in Kenya tends to coincide with a downturn in international tourism. In its stead, Kenyan residents become more frequent visitors in the country’s national parks.

Many Kenyans will, over the next few months, be returning home for the Christmas period. During this time, going on safari with family and friends will be one of the more popular activities for these returning residents.

Resultantly, Kenya’s national parks are likely to see an uptick in self-guided safaris. In many of Kenya’s national parks, local tourists are allowed to make their own way through our wild spaces. This is an incredible activity to partake in, its an amazing example of the privilege that living in this country allows its residents, and we definitely endorse local tourism.

There do, however, come some dangers with driving yourself around some of the wildest places in the world. Approaching each of Kenya’s wildlife species pose unique challenges and we recommend you familiarise yourself, by reading a reliable self-guide safari handbook, before you do go on your own self-driven safari in Kenya.

With that in mind, we wanted to create this article in order to give those that are interested in going on a self-driven safari, or just curious about elephant, a run down of what is useful to know about elephant body language.

A note on safety while on safari

All wild animals pose their own dangers. They are capable of extreme aggression and you can never be completely sure of their intent or their mental state.

If you are embarking on your own self-driven safari, always err on the side of caution. Keep a safe distance and remain vigilant. Also, remember that there is no substitute for genuine experience when it comes to interactions with wildlife. There are guides available and those that are trained in wildlife viewing will undoubtedly provide a safer experience than any amateur could.

That said, the self-drive safari is still considered safe enough to be allowable in most of Kenya’s national parks. So remain vigilant, keep calm and quiet on your approach of wildlife and make sure you are aware of any changes in their behaviour.

Elephant to be especially cautious around

Elephant are undoubtedly one of the most dangerous animals to approach while on safari. Their size accounts for a large part of why but so too does the fact that often elephant can be quite aggressive.

You may well often be able to approach elephant with no hassle whatsoever. However, there are certain conditions in which doing so is a bad idea. Understanding an elephant’s body language, and a few other certain identifying factors, are key to knowing when the situation is not well-suited to your approaching them.

As many self-guiding handbooks will inform their readers, bull elephant are considered the most dangerous to approach. They are even more so when they are in musth. The above-linked handbook gives you a detailed run-down of what signs to look out for from an elephant in musth but, if you don’t want to read that, here they are in brief:

Other elephant around which you should consider being especially cautious are mothers alone with young calves. As a part of a larger herd, or family unit, mothers tend to feel more security. However, if they are alone or separated from their unit and a safari goer puts that separation to greater mind, then mothers can act quite defensively.

What you need to know about an elephant’s body language

This section of this article has been informed by conversations on what to look out for between the article’s writer and a FGASA-trained field guide. The FGASA qualification is considered the gold-standard in African guiding experience.

An elephant’s capacity for communication is as varied as you might expect from so social an animal. With their great size and the variability of their physical being’s capacity for movement, we have even managed to understand some of those communicable ticks.

When judging an elephant’s mental state it is of greatest importance that you can effectively, and quickly, discern whether it is in a state of fear or aggression. Obviously, these two states of being are those that are likely to cause you, the safari goer, the greatest degree of danger. If noted, you must consider your approach of the creature with extreme caution.

In order to assess these states of being, look to, and assess, these five areas of an elephant’s body: its ears and head, its tail, its feet.

Those four body parts are listed as demonstrable indicators in order of how obvious they are as giving off clues as to the elephant’s mental state.

On an elephant’s ears, and accompanying head movement: The ears are some of the more easily discernible features on an elephant and, at a distance, they can be a key early warning sign of its distress. Ears lifted up and away from the face can be an elephant’s message to you to stay clear.

Like many animal species, elephant will enlarge their profile in order to warn off potential aggressors. Raised, and levelly-held ears, can be a sign that the elephant considers you too close. If this is the message that the elephant is trying to impart, then it is likely that the raised ears will accompany a lifted gaze and/or the shaking of the head.

Raised, flapping ears, however, are more likely just the elephant’s attempt to cool down. This movement, in case you are unsure, will likely be accompanied by a dipped head and down-drawn eyes.

In the case of the communicable signs associated with head and ear movement, the messages imparted are overt. However, the elephant you are approaching may not always be trying to communicate something to you. Occasionally, an unsure elephant will be suspicious and alert without yet deciding to let you know its feelings.

The tail is an important indicator of an elephant’s wariness. An elephant may appear to be feeding, its trunk pulling at grass fronds and its head bowed, but if it’s tail is unmoving, then it is often covertly watching you. This can be an indication that the elephant is feeling threatened and an unmoving tail should result in a cautious attitude from anyone nearby.

On an elephant’s feet: This is again one of the more overt indicators as to an elephant’s mental state. Elephant tend to paw the ground or shuffle uneasily, back and forth, if they feel threatened. If you witness this behaviour it is a more immediate sign of the elephant’s distress than often is the head shake/ears out signage.