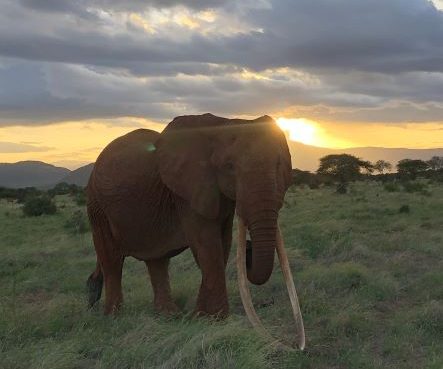 This week started saddeningly. One of our Super Cub pilots discovered the remains of Dida, the Queen of Tsavo. Dida was one of five iconic cows that we monitor here in the Tsavo Conservation Area. Iconic cow is the term given to a female elephant with tusks rivalling those of the male Super Tuskers.

Dida was between 60 and 65 years old according to KWS estimates and she lived a long life and died a natural death. As we wrote in our obituary of this incredible icon, she was a true dynastic presence and the unfailing shepherd to her herd as they navigated many a harsh season in Tsavo.

As any of you who have had the misfortune of seeing the grizzly photograph of her carcass will know, Dida died with her tusks intact. That, in itself, is a success. All of the varied wildlife conservation organisations that have played a part in protecting this awesome creature can rest easy in the knowledge that her life was lived as organically as is possible in this day and age.

That said, Dida’s death leaves us with a heavy heart.

Elephants, death and whether we can surmise anything out of their considerations of it

We know, through many observations, that elephant are seemingly capable of recognising corpses as once belonging to companions in life. The evidence is anecdotal and the surmises we make are inescapably anthropomorphised, however, there are many accounts of elephant family members lingering over the bodies of fallen family members.

(See here for an interesting video of elephant herds interacting with a corpse, and for the discussion it brought about.)

We may never be able to accurately state that this is an indication of an elephant’s experience of grief. However, the fact of recognition alone suggests a higher cognitive capacity than many people are willing to accredit to these incredible creatures.

Our pilots here at the Trust have also noticed that adult female elephants tend to separate themselves from the herd when they feel as if their death is impending. With Dida, in fact, we would put extra effort into the monitoring of her whenever we saw she was separate from the herd.

Again, we can only speculate as to why female elephant do this. But the fact that they do suggests at their having at least a recognition of what might be coming. When a matriarch separates itself from the herd, it is often the herald of huge change for that group of elephants.

The matriarch has been characterised, by animal behaviouralists, as the glue that holds the herd together. According to a research paper authored, in part, by biologist Ian Douglas-Hamilton, the “loss of a matriarch may result in herd dissolution”.

We wrote of Dida, who we knew so well, that she was an invaluable repository of many decades worth of important knowledge. With that as the case, one can see why this unfortunate happenstance, the dissolution of herds, occasionally happens with the departure of one so important.

The matriarch is obviously much more than simply a source of information, and losing that alone may well be reason enough for the change from a herd that once worked into one that can no longer stay together.

However, as we also know, elephant are incredibly social creatures. In one of our previous articles, we explored the effect that developmental trauma can have on elephant young. We wrote our article based on the findings of a research paper that had considered the responses of two elephant herds to the stimulus of lions roaring.

One herd was the product of a more traditional upbringing. The young grew up under the guidance of a largely unchanging roster of adult females. The other herd was comprised of orphaned elephants. Their parents were killed in a series of culls organised in South Africa’s Kruger National Park.

The elephant herd with a more traditional upbringing, which was based in Amboseli National Park here in Kenya, had what is considered a typical response to the hearing of recorded lions’ roars. If the researchers played one lion roaring, the Amboseli herd showed little signs of concern. If the researchers played the sounds of three lions roaring, then the herd bunched together in a protective huddle.

With the other herd, in Pilanesburg National Park of South Africa, the elephants bunched together, defensive and agitated, with the sound of only the one lion to frighten them into doing so.

These findings were taken as indication of an early trauma settling in amongst the elephant translocated from Kruger to Pilanesburg. The elephant who had lost the influence of adults early on in their development were more easily disposed to caution than were those that had the benefit of learning from another generation.

What the researchers also found, undoubtedly, is an indication of just how important social bonds are in maintaining a group’s healthy composition. It is of no surprise therefore, to us, thinking, sociable human beings that the loss of a group’s member could have serious ramifications on whether that group continues to work as a dynamic.

Obviously there is a degree of speculation inherent in this suggestion. This writer cannot know for certain that the reason elephant herds occasionally break apart with the loss of a matriarch is because that matriarch acted as a social lodestone to the rest of the group.

However, with what else we know of elephants, of their intelligence and the primacy they put on the bonds they have with others, it doesn’t seem so large a leap to imagine it being the case.

Conclusions, if we allow ourselves to draw them

We may never know whether we can go so far as to say that an elephant social dynamic was dependent on one character for its working. We may never know if an elephant experiences grief as we understand it. We can’t really even be sure that it was trauma that made the elephant of Pilanesburg behave as they did.

What we can be sure of, even with our sketchily drawn picture of the emotional environment of elephant, is that they are significantly more complex than previous generations of humans have given them credit.

We, here at the Tsavo Trust, are so very proud to have had the opportunity to look after these creatures, Dida including. The fact of her death is devastating but that it was of natural causes and after a long, fruitful life is testament to the successes of the Big Tusker project.

We will pay a close eye to the herd she leaves behind. Every elephant here in Tsavo comes under our purview, and that would be reason enough. But we will watch out for Dida’s herd with extra care because we share a common experience that presently brings us closer together than ever we have been before.

Right now, we, elephant and humans alike, mourn Dida together.