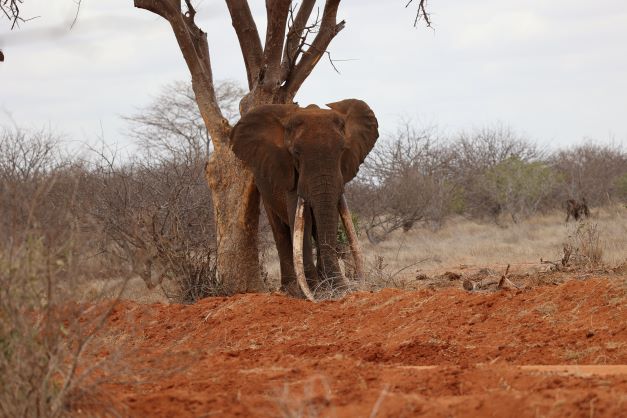 As many of you are undoubtedly aware, this year has seen much of East Africa play host to one of the worst droughts seen in this part of the world for over 40 years.

The Tsavo Conservation Area, home to our organisation as well as Kenya’s largest population of African Savannah elephant, has suffered particularly badly at this drought’s hands.

This year has been characterised by long months of limited to no rainfall. Many of the region’s water sources, man-made boreholes and naturally occurring water-pans, have dried up. The result is that this already arid landscape is now bone-dry and it’s inhabitants are struggling to scratch out an existence.

The pressure this puts on this always precariously balanced ecosystem is immense. Our migrating elephant herds are forced into longer and further-flung treks in the search for water sources. This makes our monitoring and protecting of them difficult. Often, travelling elephant will leave the safety of the national parks, straying into areas of high human habitation.

This puts human neighbours to the park at risk. It puts our elephant at risk from people trying to protect their property. And it makes our job significantly more difficult. Human-elephant conflict, as many of our regular readers will be aware, is an increasingly prominent challenge elephant conservationists face.

(Read more on how climate change is changing the face of elephant conservation here.)

(For an especially worrying account of how drought is impacting the precarious balance of human-elephant cohabitation in Tsavo, read this article on how some 47 children, aged between 8 and 17 were found inside one of Tsavo’s national parks in October of last year. The children had fled their drought-stricken family homes in Kilifi and Tana River counties and were assumed to be in the park looking for water and grazing opportunities for the livestock they were travelling with).

In their desperation, the elephant that we have promised to protect are putting themselves in danger. However, now, with the affects of this drought as long-standing as they have become, the danger to our elephant wards has gone beyond the difficulty and increased risk of their moving out of the parks.

Since the beginning of this year, and as the direct result of drought, 109 elephant from the Tsavo National Parks have died. That is according to the country director for the Africa Wildlife Foundation, Nancy Githaiga, who highlighted that this is now one of the more prominent challenges facing elephant conservation.

“If we were to look at the numbers of wildlife we lost through poaching in the last few years and what we have lost in the last year through drought, we can’t even make a comparison,” said Githaiga.

The elephant are either dying from causes relating to malnutrition or from thirst. It is incredibly difficult to bare witness to. Furthermore, it is difficult not to let one’s self become despondent because, more likely than not, this problem is only going to get worse.

As Kenya’s new president recently pointed out in an article he authored for the British newspaper, The Guardian, Africa is the continent most affected by, and least responsible for, the global temperature rise.

He notes that many millions of people living in the Horn of Africa, are, at present, suffering from, or at risk to, famine. This famine is a direct result of the same extended drought conditions that has been killing Tsavo’s elephant.

It is no secret to most of the global population that the planet-wide rise in temperature that has been measured since the pre-industrial era is a result of certain industrial practices. Most notable amongst the contributors to the heating of this planet are the fossil fuel industry and the oversized agrarian systems practicing in certain parts of this world.

It is slightly less well-known that one of the great fears broadly shared by climate scientists is that the planet may soon reach certain accelerating milestones that will hasten and catalyse the speed of climate change.

We who watch over the elephant of Tsavo know the loss of every individual elephant feelingly. However, we also know, in the face of challenges such as this one, that if the problem persists, or even worsens, we might be baring witness to the initialising slide of the beginning of a slippery slope.

Elephant, by no means the only animal species dying in obvious numbers as a result of this drought, are what is considered a keystone species. That means that they are essential to the health and maintenance of their ecosystem. Without elephant, African savannah grasslands would not be what they are.

As they go about their organic grazing patterns, elephant uproot small shrubs and fertilize grasses along their huge migration routes. As they do so, elephant and other grazers maintain the health of grasslands. Healthy grasslands are very effective carbon sinks. Over time, grasslands create a lot of soil which, if left as it is beneath most grasslands, is a long-lasting carbon store.

What is especially worrying, from a planetary/biodiversity standpoint, is the fact that as the climate that supports elephant deteriorates, the animals that are important ecological engineers in its maintenance will die and therefore hasten the demise of that ecosystem even further.

As we witness the death of elephant in the Tsavo Conservation Area, we find our worries compounded by the knowledge that the loose-skinned corpses lying in their red-soil resting places belonged, in life, to creatures that were well-suited, if only they were given the opportunity to do so, to ensuring this problem worsened no further.

This year’s Global climate change conference, COP27, will be hosted in Egypt. World leaders will have the chance to debate on and push for greater climate action.

African diplomats are expected to urge the leaders of richer nations to honour their pledge to do more to combat climate change and to honour their promise to meeting a 2009 funding promise that is presently unfulfilled.