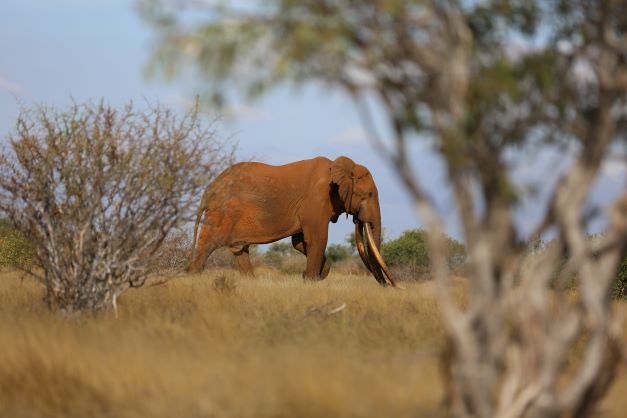 The African elephant is a true icon of wildlife. It is a symbol of the African wilds. A wind-waved savannah scene cannot be pictured without also conjuring up the impression of an elephant herd’s steady progress through it’s middle-distance.

Many of us need no further reason to justify the protection of this iconic creature. It’s majesty; the impression of timelessness that it’s craggy skin and wizened eyes offer allusion to; it’s fear- and awe-inspiring size, these are reason enough.

But, of course, there are more reasons, founded in climate science that demonstrate the inarguable utility of these creatures. In this article, we will demonstrate this usefulness and inform those that are interested on what exactly an elephant does for its natural environment.

The African savannah elephant is a ‘keystone’ species

In previous articles, we have discussed how protecting species such as the African elephant has a wider and greater impact on generalised conservation than certain smaller, lesser known species.

In those articles, we highlighted the fact that as elephant and their huge migratory routes are protected, so too are the smaller and less wide-travelling of animals that share the same habitat.

It is a great shame that we cannot give enthusiastic and proportionate efforts to the conservation of all animals. However, the resources funnelled into wildlife conservation simply do not allow it.

That is why protecting certain species, those that are considered ‘keystone’, is so important. The conservation of elephant protects it’s neighbouring species by proxy, but, as a keystone species, the protection of elephant also protects the habitat.

A species is considered keystone if the role that it plays in its habitat is essential in the ongoing present existence of that ecosystem. African savannah elephant are keystone to savannah grasslands because without the role that elephant play, the grasslands would disappear or witness a drastic redesign.

In what ways does the African savannah elephant influence it’s habitat?

As keystone to grasslands, the most important role that an elephant plays is in the limiting of acacia tree and shrub growth. Elephant eat immature acacia trees growing in savanna grasslands. The constant grazing of migrating herds ensures that grassland does not turn into dense, foresting woodland.

In fact, in certain parts of Kenya and Tanzania, where we can see novel elephant absence, it is quite evident that woodland is emerging. In south-western Kenya, alongside the famous Maasai Mara national reserve, there is a slim section of privately owned land between the reserve and neighbouring conservancies.

This land is sparsely populated by human habitation and elephant have increasingly come to avoid this area. With elephant less and less frequently seen in this patch of earth, immature acacia trees are becoming quite increasingly evident. This has an obvious effect on the area. As more acacia trees make it to adulthood, more seeds are allowed to germinate.

We might soon see a future in which this corridor between reserve and conservancy is defined by acacia woodland rather than savanna grassland.

So, how does the maintenance of grassland impact the wider ecosystem? Well, on grassland, many antelope species are dependant. It is in this habitat that wildebeest, impala, and gazelle species graze. As a result of grazers, predatory cats and hyena hunt on grasslands. This is why elephant are so important to grasslands.

The role that this creature plays does not end there, however. The African savannah elephant also plays a role, as most herbivores do, in the distribution of seeds. So too, does it play a role in ensuring the good health of insect species that rely on elephant dung for their sustenance. Consider the noble, and unfairly-made-infamous dung-beetle. Elephant also clear paths through forests and thick brush. On these paths, other animals are dependent.

Elephant also find salt licks that other species rely on for that essential mineral. They, through the use of their tusks – which we covered in last week’s article – are also capable of digging for subterranean water. This water, once found, is essential for the survival of other species during drought.