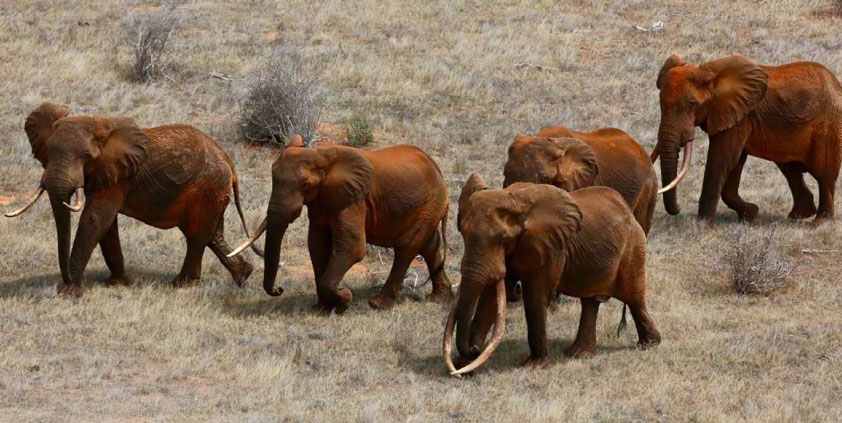 Here at the Tsavo Trust, we spend a lot of time over the conservation area. In our Super Cub aircraft, we can travel far further and far quicker than if we were limited to the ground. Because we get to see so much more of the roaming herds of Tsavo animals, we inevitably begin to recognise familiar faces.

This article is about two of our favorites.

Balguda, codenamed BA1, is one of the ‘Big Tuskers’ we keep a regular eye on. He has a beautiful pair of equal length tusks that, aside from a few stains, are in perfect condition. He is often in the limelight and he’s never without his entourage. In that, he’s a little like East Africa’s Kanye West.

That’s because he loves the public eye. Our pilots have noticed that when our planes are about Balguda seems to relax. He is visibly less agitated and a few of our pilots can’t shake the feeling that he acknowledges our presence when we’re around.

But the similarity doesn’t end there. We seldom see BA1 without five other bull elephants that we have come to call his bodyguards. You can see Balguda and his bodyguards in the photograph above. They’re an inseparable six-some that is not unheard of amongst male Elephants but it’s not particularly common either.

Those who are lucky enough to observe Balguda, KWS rangers, and Tsavo Trust operatives, all recognise his remarkable intelligence. He has some truly majestic tusks which, whilst beautiful, make him vulnerable to poachers. It makes you think about his bodyguards and the relationship he has with our pilots. Does he understand the danger he is in? Perhaps his acknowledgment of our planes indicates how much he appreciates the help that his friends, human and elephant, offer him?

There is no way of knowing for sure. But, it is clear that Balguda is a remarkable animal.

Lovely Lugard and his interesting wart

A favourite amongst many of our pilots, Lugard, codenamed LU1, stands out for many reasons. His huge tusks are one. His interesting wart is another. You can see his wart on his trunk, just above where the tusks begin to poke out.

Lugard’s wart stands him apart and, far from shy away from it, he seems to be very happy with it. Lugard is one of the more friendly and approachable of the big Tuskers we follow. He is very popular with the Trust’s ground and air teams. Both suggest that working with him is very easy, if they say so for different reasons.

For the air teams its because LU1 is easy to distinguish, what with his unique facial adornment. For the ground teams it’s because of his happy personality.

What is interesting is that Lugard, like Balguda, seems to be very aware of when he’s safe and when he isn’t. Call it the intuition of the savannah, but Lugard knows which parts of the Tsavo Conservation Area to rush through and which parts he can amble happily over.