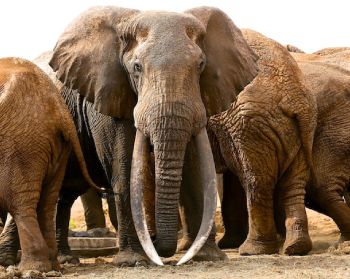 For those who are lucky enough to have seen an African Elephant in the wild, the term ‘big tusker’ may be familiar. However, there are many out there who will be hearing the phrase for the first time. ‘Big tusker’ refers to an elephant with tusks so large that they scrape the floor.

Unfortunately, the opportunities for witnessing a big tusker in its natural habitat are slim. As of today, there are approximately 20 left in the world, most of which reside in Tsavo.

There are a number of reasons why ‘big tuskers’ are so rare. Firstly, elephants with tusks that large are a natural rarity which only adds to the mysticism surrounding their majesty. Secondly, these massive elephants are under constant threat from poachers. In China, 1kg of ivory sells for several thousand dollars and a ‘big tusker’ can have tusks that weigh over 50kg.

At Tsavo Trust, working in conjunction with Kenya Wildlife Service, or KWS, we are faced with the momentous task of trying to protect the ‘big tuskers’ from the ever-present threat of poaching whilst also allowing them the freedom to roam that is so integral to the life of an elephant.

The importance of ‘big tuskers’

Elephants use their tusks in a variety of ways to assist in their daily routine. They offer protection against predators, help them dig, forage and strip bark from trees. Additionally, bull elephants use their tusks as a display feature to attract the interest of females. By protecting the ‘big tuskers’ and ensuring they live a happy and normal life, elephant conservationists ensure that their genes remain in the gene pool and the presence of ‘big tuskers’ in Tsavo and the rest of Africa can be continued.

The giants of the savannah are iconic. In 2014, the murder of Satao, and the theft of his ivory, affected many across Tsavo and across the world. Satao, resident to Tsavo East National Park, was an icon in the great megafauna of Kenya. His death leaves a gaping hole in the hearts and minds of all involved in elephant conservation. It is imperative that his genes, and others like him, are protected.

A future where there are no ‘big tuskers’ in Tsavo is not worth thinking about. The presence of these majestic animals brings huge numbers of tourists to the park every year and that income is vital to further conservation efforts and supporting local communities. In Kenya, the co-dependence between humans and animals is strong and at Tsavo Trust we are doing all we can for this beautiful relationship to continue and modernise.

There are several ways to help with elephant conservation and the protection of ‘big tuskers.’ At Tsavo Trust, our efforts begin out in the field. With the help of aircraft, on-the-ground vehicles and experienced guides, we monitor the ceaseless movements of Tsavo’s elephant populations. Some areas are a higher risk for poaching than others and it is important that we know where the elephants are at all times.

Additionally, working with the KWS, we help to boost patrol numbers, making it easier to locate elephant carcasses, determine the cause of death and use the evidence to identify poaching platforms.

Elephant conservation is dangerous work, and in an ideal world, we wouldn’t have to put good men and women in dangerous situations. That is why there are huge efforts to effect more systemic change. Political efforts have been made to close ivory markets in various Asian countries. Hong Kong, for example, is set to have phased out legal ivory trade by 2021. However, there are still huge gaps in policy enforcement due to corruption and this can lead to increased danger for elephants and elephant conservationists.

If we want to protect existing ‘big tuskers’ and create an environment where more of these beautiful behemoths can flourish, then there needs to be more social change across the world. If there is still a market for ivory, then our ‘big tuskers’ will always be under threat. Whilst political efforts will lead to the illegalisation of the ivory trade, illegal markets will continue to exist, and the value of ivory will increase. Social change is the only way of stopping this and it starts with all of us.

The intelligence of elephants

If you are not yet convinced of the importance and momentous challenges facing all elephant conservationists then I will leave you with this story about Tim. Tim, up until quite recently, was a stalwart of Kenya’s big tuskers. Sadly, he has passed away.

Although Tim was not a Tsavo resident, he is famous across Kenya and used to bring joy to all those who were lucky enough to spot him in Amboseli National Park. Tim had some altercations with farmers, and on one occasion in 2014, conservationists were required to step in when Tim suffered from a wound he got from a farmer’s spear. A few years later, Tim suffered a similar wound from a spear and, using his impressive memory, wandered into a conservation camp in search of help. Here, he was tranquilised and repaired and was able to wander back into the wild.

Elephants possess huge emotional intelligence and, across Africa, there are examples of communities and elephant populations living side by side in relationships based on mutual respect. Elephant conservation isn’t purely about monitoring and protecting elephants from poachers, it is about developing new and respectful relationships between man and elephant.