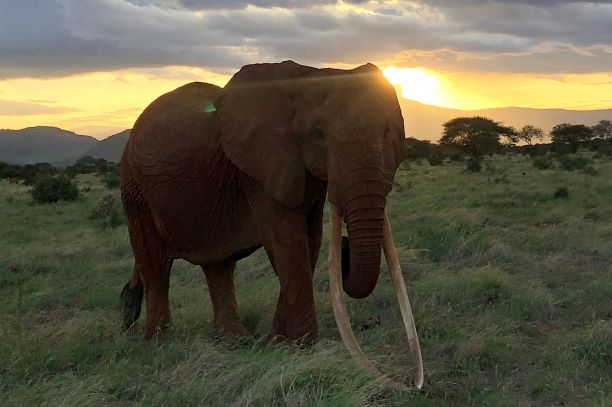 Recently one of our team members received a photograph of a big tusker, sent in by a safari-goer on a game drive. The lucky tourist, on a drive near the Kanderi Swamps in Tsavo East National Park’s south-west, spotted Dida, one of the big tuskers we’ve been monitoring for quite some time.

Dida is one of the park’s most famous big tuskers. Adorned with ivory that stretches down to the ground, she’s quite a spectacle. Tusks so big are not found very often in any member of the African elephant species, but they are especially noteworthy on a female.

Dida has been around for a good long time and the reason this photograph, sent to a member of our team, caused such excitement is because we had all been worrying of late whether Dida hadn’t in fact reached her time.

As elephant come to the very end, they tend to separate themselves from the rest of the herd.

This behavioural practice led to the creation of the almost mythologised notion of an elephant’s graveyard. When we speak of an elephant’s graveyard it is hard not to immediately think of the one depicted in the Disney classic, The Lion King. A dark, haunting place, defined by elephant skulls, hissing vents of steam and packs of hyena, it should come as no surprise to our readers that this isn’t at all based on what happens in real life.

What is true, however, is the fact that, on occasion, old and slowing members of a herd will separate themselves from it for their final hours. We are unsure exactly why this happens and it certainly isn’t a rule that all elephant follow as they approach their end, but it definitely does occur.

And, before we received this photograph of Dida, the last time we’d seen her she was on her own.

So, as the photo came in, our team member immediately called the tourist who had spotted her. In the photograph, Dida, looked like she was alone. She looked like she was in good health and that there was nothing outwardly wrong with her, but there were certainly no other elephant in shot.

When, eventually, we got through to the person who had spotted Dida, we were encouraged to find out that she was amongst a herd of around seven other individuals. In fact, when she was seen, she was quite happily playing with a youngster.

Dida is one of our favourites, and has been for a long time. So, this was incredible news for our team.

This episode highlights the importance of eco-tourism

In a previous article, which you can access here, we spoke about some of the effects the global downturn has been having on wildlife and conservation.

There have been a number of effects and, as is often the case with such globally-felt phenomena, they have been neither wholly good nor wholly bad. Areas that have seen huge human populations, tourism hotspots for example, have seen the return of wildlife that have been away for, occasionally, generations.

However, as has been the case in certain African wildlife parks and reserves, conservation has suffered in certain respects. As is proven by the spotting of Dida in the Tsavo East National parks, tourists can play a hugely important part in conservation.

Tourist dollars bring money into conservation, but the physical presence of touring visitors can also be helpful in monitoring purposes. In Kenya’s national parks, for example, safari operators are always on the lookout for the game that they intend to show to their paying guests.

As a welcomed side-affect of these game-viewing safari drives, safari company operators often have a good idea about where the wildlife is. They often are there to witness injuries done to certain animals, how close they are going to human habitation, and, in the case of Dida, their general state of health.