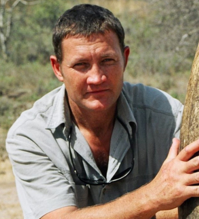 Born and bred in Kenya, fulltime Tsavo resident and Honorary Warden with the Kenya Wildlife Service (KWS), Richard Moller is one of the country’s most respected hands-on conservation project managers. A passionate conservationist, he brings to TSAVO TRUST over 15 years of practical field experience in wildlife conservation. Star of Discovery Channel’s ‘Game Ranger Diaries,’ he cut his teeth in the field of conservation management at the Lewa Wildlife Conservancy, which is a 60,000-acre rhino sanctuary, holding both black and white rhino alongside a multitude of other species including the ‘Big Five’ and 20% of the world’s remaining population of the highly endangered Grevy’s Zebra. In May 2013, Richard was appointed to sit on the KWS Elephant Management Committee for the Tsavo Conservation Area (TCA). This committee works to address current elephant security and management issues.

• During his 11 years at Lewa, he worked his way up from Works and Logistics Manager to Chief Conservation Officer and Deputy to the CEO.

• Holds the rank of Inspector with the Kenya Police Reserve.

• A highly experienced bush pilot, with over 3,300 hours of piloting light aircraft in challenging conditions.

• Regarded as an expert in conservation of endangered species and involved in formulating policy alongside KWS.