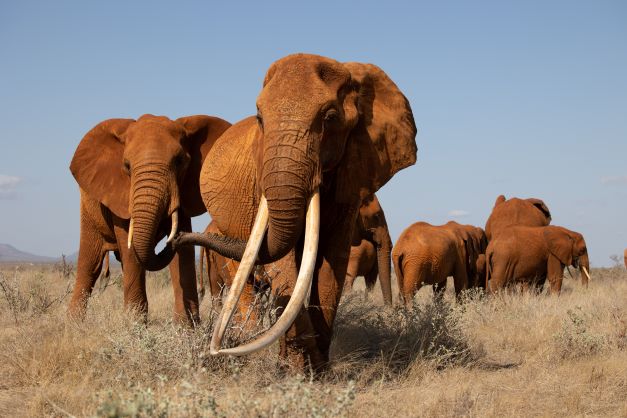 All of our readers will know of the close-knit family ties within elephant families. Through their close association, across numerable generations, elephant families are able to benefit from a group’s shared experiences in assessing the dangers inherent in the varied habitats they make home in.

In the global popular imagination, much has been made of the elephant’s incredible memory. Indeed, evidence of it has been found in not infrequent accounts of a matriarch’s leading her herd to a watering spot decades after last visiting it as a calf.

Certainly, this is illustrative of the benefits of that long-lasting memory. But it is just as clear an indication of the importance within these family sets of the elephant’s inter-generational relationship.

An elephant calf is generally two years old before it begins the process of weaning off it’s mother’s milk. The process thereafter, leading toward eating entirely solid foods, takes a further year. Infants are lead often, assisted with difficulties in walking or standing, they are taught to swim by other adults.

In fact, an elephant adolescent, under eight years of age, spends as much as 91% of its time within five meters of an adult family member. Much of that time is spent in bond-building interactions. Elephant families face threats together, they experience hardships and moments of excitement together.

We cannot, of course, even begin to comprehend the flavour of this lived experience. We have, however, recently begun to attempt to do so. With the limited tools we have at our disposal, and with humanity’s laudable capacity for diligent study, researchers from across the globe have spent much of the last few decades proving elephant far from the unthinking beasts that animals are often reduced to in our minds.

Elephant, according to researchers and observers coordinated by a George Wittemyer from the University of Colorado, have been collating accounts of elephant families interacting with the corpses of deceased family members.

The research, which consists of 32 original observations of 12 elephant carcasses from across Africa, illustrated a repeated interactive nature to family units as they related to the carcasses.

Wittemyer was cautious not to go so far as to say that this is illustrative of an elephant family’s mourning. Researchers are, fairly, cautious of anthropomorphising elephant. What’s more, caution should be exercised in the exercise of ever attempting to gauge the exact colour of another species’ lived experience.

Those caveats considered, what was witnessed by the team of observers was significant enough for Wittemyer to state that it “indicates advanced feeling”. The family members were reported to revisit the carcass on several different occasions.

We may not be able to state with any certainty what this behaviour is indicative of grieving but, with what else is known of elephant, with their complex social ties and the otherwise demonstrable value that is placed on these interactions, this writer finds it easy to agree with Wittemyer’s assessment.

The considerations made above are important ones to keep in mind as we explore the following findings made by a joint research group from the Universities of Bangor and Kwazulu-Natal.

The research team used lion roar recordings to gauge how different elephant family units responded to threats. Lion do not attack elephant often but they have been reported to attack unsupervised calves. Despite that there are few pressing threats to elephant from other species, aside, of course, from human beings, lion are certainly the top of the list of their greatest dangers.

When hunting lion are present and considered a threat, elephant families will form a defensive unit around their most vulnerable. Influential family members, benefitting from experience, are capable of making the assessment of dangers quickly and responding in an appropriate manner.

The research teams sought to assess threat-responsiveness and compare it across different family groups. They considered organically-formed family groups in Amboseli, Kenya, against family groups from Pilanesburg National Park in South Africa.

The Amboseli families were comprised of many related females and adolescent males. In keeping with the dynastic structure to these organically-formed family units, older females grew up together and often under the stewardship of a shared matriarch and set of influential females.

The Pilanesburg families had a completely different composition. They are the survivors of several 1980s elephant culls in Kruger National Park. Responding to what was then considered an issue of overpopulation, Kruger officials culled adult females and rounded up the young before sending them to Pilanesburg.

The Pilanesburg herds, therefore, are comprised of largely unrelated individuals and none of them benefit from the experience passed down to them by older relatives.

Researchers played these two different populations recordings of lion to assess their response to this threat. Playing two different types of recording, one of one singular lion and the other of three lion roaring in concert, the observers monitored the results.

Both sets of herds formed into defensive circles around the young on hearing the recordings of the three lion. The Pilanesburg family units were also quick and alert in their response to a singular lion’s roar. The Amboseli herds, however, were less so. The Amboseli herds did not jump immediately to the formation of defensive units if only one lion, a limited threat to elephant, was noticed.

The researchers posit the theory that this disparity is down to an overcautiousness in the family units that lack the experience to gauge proper threat-levels. Of course, a number of other considerations might be made and the differences between national parks alone have been shown to foster different attitudes in elephant populations.

Nonetheless, this finding is interesting and with what we know of elephant, the researchers’ hypothesis seems a logical one.

This phenomena may not be the most pressing cause for concern when it comes to the issue of elephant conservation. It does, of course, highlight the importance of allowing these animals the ability to build their social ties in as organic a fashion as possible. The more we know of these creatures, the better prepared we are to make plans for a future that includes them.

There may still be some wondering at whether the increased cautiousness of non-organically formed family units is much of an issue. However, what this study indicates as to is the learned quality to elephant protectiveness and aggression. And this might be key to the organising of a world in which humans and elephant can peacefully coexist.

Farmers and inhabitants of areas shared by humans and elephant can, quite understandably, become protective of their lands, crops and properties in the face of close proximity with elephant. Due to the danger posed by both to both, interactions can become quite fraught rapidly.

Perhaps it is an optimistic reading to suggest that this research might be used to soften the edges of humanity’s relationship with elephant. Optimism is, however, at the core of elephant conservation and if we can build a world where elephant and human beings are not so threatened by one another, perhaps violence between the species will be less frequent.

There is, therefore, an outside possibility that long-term socialising of elephant with human beings may pave the way to a relationship of peaceful cohabitation.