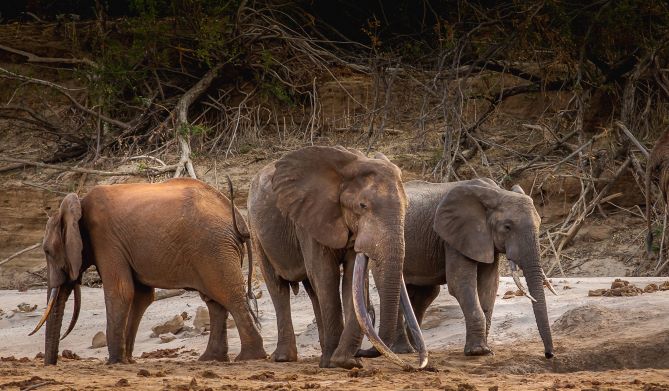 After homo sapiens, the African elephant is the second longest lived land mammal. As with every other species presently sharing this planet with us – the most influential land mammal to have ever inhabited it – the habitats elephant are well-adapted to are presently the subject of much change and incursion.

With poaching and the illegal trade of wildlife a reduced threat to the long-term stability of elephant populations in Africa, habitat loss – promoted by rapidly growing human populations and inadequate legal protection for wild areas – has become the focus of elephant conservationists.

Key to the protection of this icon of Africa’s savannah wilds is the preservation of their organic modes of existence. Many of our readers, we have no doubt, are knowledgeable of the facts of an elephant’s existence. For those that are interested, however, we will lay out what is known of how elephant’s life their lives.

At 18-22 months, the gestation period of an elephant is the longest of any extant mammal. The average elephant new-born weighs around 100kg and is about one metre tall.

Weaning is a prolonged process. It can begin at one year of age and the weaning process can still be ongoing for an elephant of ten years old. Often, the process only ends when the mother can no longer tolerate the abrasion from its offspring’s emergent tusks or when another new-born is birthed.

During the weaning period, baby elephant will drink around 11.4 litres of milk a day. The production of milk can be very taxing on a mother. Challenges inherent in procuring the appropriate amount of nutrients to create milk for their young can also expedite the weaning process.

The brain size of mammals at birth as compared to the brain size of adults in the same species is considered a good measure of how much room that particular species has for cognitive development.

Elephant are born with a brain weight of 35% of an adult brain.

Elephant, it has been observed, are dependent on a similar degree of learned knowledge to human beings. In fact, elephant new-borns don’t even know how to use their trunks without instruction. This level of ignorance at birth is key to an elephant’s capacity for developing into the thinking creature many of us know it to be as an adult.

This capacity for brain development in elephant, comparable to human beings, allows for a great deal of mental agility in this species. It makes them adaptable and considered and it has long been associated with their weighty dependence on social ties.

In the wild, cows tend to spend much of that time in small family herds. Bulls separate from their family units at sexual maturity and will often join bachelor herds.

African elephant arrive at sexual maturity between the ages of 10 and 12.

Both sexually mature males and females secrete a fluid called temporin from an open gland between their eyes and their ears.

During the males’ ‘musth period’, a time of heightened sexual energy, they secrete a fluid, comprised of serum testosterone, from this gland as well. Musth (from the Hindi for ‘intoxicated’) is a period in which males, who can often act erratically when they are in it (hence the name), is when males establish the reproductive hierarchy.

This hierarchy can be different to the social hierarchy and is not necessarily about height, strength or social dominance. Musth males tend to do most of the mating, outranking (in reproductive matters) non-musth males.

Elephant are some of the only animals that tend to live longer in the wild than they do in captivity. What’s more, the difference between life expectancy of wild elephants is significantly higher.

African elephant are expected to live to around 56 years of age in the wild. The Asian elephant can expect a shorter lifespan, at around 42 years, in the wild.

However, African elephant that live in captivity can only expect to live until they are around 17 years of age. For Asian elephant, the expectancy is 19 years. Elephant that are born in captivity are also expected to die earlier than those imported into a zoo or otherwise enclosed environment.

It is not entirely clear why lifespan shortens for elephant in captivity when it does the opposite for many other animal species. Theorists have pointed to reduced opportunity for socialising, and its impact on stress levels, and the fact that captive elephant are unable to get in the same level of exercise as their migrating, wild counterparts, as reasons for why.

There are, it must be said, question marks over whether this is still the case. Much of the evidence that has led to this assertion came from elephants living in zoos in the ‘60s and ‘70s.

Modern zookeepers would have us believe that this phenomena has changed and that increasingly elephant-friendly zoos are re-writing this narrative. San Diego zoo, one of the world’s finest, presently has seven Asian elephant inhabitants all in their late 40s and 50s.