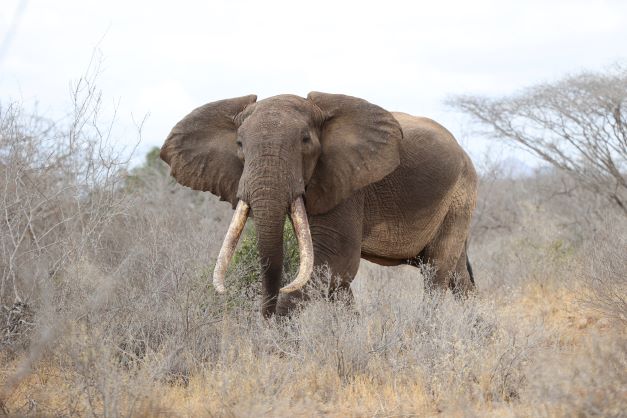 As the AWF has been conducting these reports for the last three years, they give a useful measure of how elephant conservation in the monitored countries has changed over this period of time. As yearly reports, they are also current. From the information within them, we get up-to-date information on the changing challenges facing, and the successes and failures of, elephant conservation.

For the purpose of this article, we will consider the latest developments in elephant conservation as they relate to East Africa’s three biggest countries.

The bulk of those elephant reside here in Tsavo. Around 16,000 elephant live in the Tsavo Conservation Area.

Hugely influential in this year’s report on elephant conservation, for both Kenya and Tanzania, is the drought that we have informed our readers of at length. Despite the observable 5% increase in the national elephant population, this drought, which has been with us for much of this year, has killed many of the region’s elephant.

We reported, a few weeks back, on the fact that, here in Tsavo alone, 109 elephant have been killed this year as a direct result of drought conditions.

It remains to be seen how influential this drought will be in shaping the progress elephant conservationists here have seen in bringing the elephant population back toward recovery. However, the AWF report does pose this drought as a serious cause for concern.

Kenya and Tanzania share a 758 kilometre long border. It is not fenced and much of that border bisects native land used by roaming wildlife. The concern used to be that whatever good work was done to protect elephants in Kenya could be immediately undone as they travelled south and into Tanzania.

According to the Environmental Investigation Agency, between 1998 and 2014, 87 tonnes of ivory seized on the international black-market originated in Tanzania. That made it the international hub for the sourcing of illegally traded ivory. It also meant that between 2009 and 2014, the elephant population of Tanzania dropped by 60% according to government statistics.

Since, however, Tanzanian conservation efforts have witnessed a turnaround. The elephant population of Tanzania has increased from 43,000 to 60,000 between 2014 and 2021. The AWF report alludes to the fact that a scaling up of the efficacy and punitive capacity of anti-poaching legal measures played a part in reducing poaching’s influence in the country.

Aside from the successes in population recovery and in curbing poaching, the AWF report also mentions that cross-border collaborative efforts, between Tanzania and Kenya, are in development. This could prove to be very exciting; elephant conservation really must be a regional undertaking if it is to reach a greater potential for influence.

The AWF report states that in Uganda, elephant populations are also on the rise. According to the report, this rise is due to increased legal scope in the prevention of poaching.

The report on Uganda is interesting in that it suggests that another reason why the population there is rising is that elephant are traversing the Uganda/DRC border, into Uganda, as they flee poaching in the DRC.

Virunga national park, in the Democratic Republic of Congo, is infamous for its being the subject of political instability and guerrilla warfare. The elephant there, it seems, have decided to move on and are now being observed relocating to Uganda’s Queen Elizabeth Conservation Area.

The report makes mention of the facts of this population recovery but also highlights the problem of HWC. The recovery of elephant populations in East Africa is obviously incredible, heart-warming news. However, it does not come without its issues.

As we have seen here in Tsavo, where a blossoming human population is expanding alongside elephant herds, there is huge scope for conflict between the two species. Despite that the world at large doesn’t seem particularly aware of this fact (see ‘Tweets about elephant suggest widespread misunderstanding about conservation issues‘), human-elephant conflict is one of the biggest issues facing the conservation of elephant.

If you want to access the full AWF report, you can do so here: