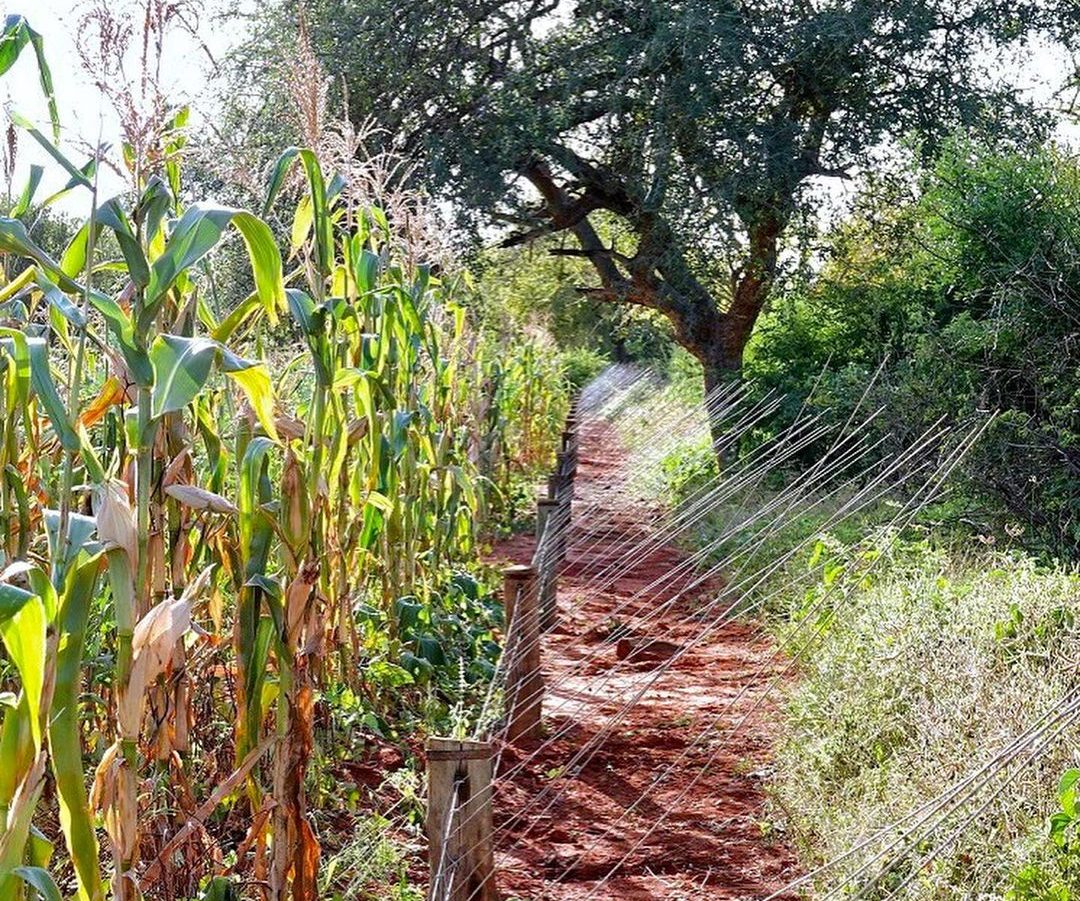 In last week’s article, we introduced one of our flagship fencing projects that is designed to decrease instance rates for Human-Wildlife Conflict (HWC).

Within certain Kamungi villages that surround the Tsavo national parks, we are currently trialling what we call the 10% fencing initiative. With funding from our backers, we have built strategically placed, short ‘porcupine’ fences around 10% of the land owned by these subsistence farmers.

On Kamungi lands, the property sizes combined under single ownership tend to vary between 20 and 150 acres.

The idea is that this fenced off 10% is completely, and effectively safeguarded from wildlife. This ensures that the produce from this land is more consistently relied upon. The other 90%’s being tended for agriculture thus becomes less essential. It can, therefore, be left for the use of wildlife that have lived off and migrated on it since time immemorial.

We hope that the safeguarding, of both human agricultural produce and historic migratory routes, reduces the flashpoints for violence between human and elephant. This is an inventive use of fencing that we hope solves a complicated problem. If this trial proves effective, we hope we’ll have harnessed the good elements of using fencing in conservation while reducing the bad.

If you want to read our full break-down of the 10% fencing project, you can access the document here.

Fencing: a long and complicated history of use in conservation management

In 2018, a study co-authored by Kenyan and Western researchers investigated the use of fencing in conservation. They used the African Elephant populations of the Kenya-Tanzania border and they measured how functional connectivity between elephant individuals along their usual movement corridors was affected by the erection of fences.

The researchers recognised that the building of fences is one of the most effective methods of reducing Human-Elephant conflict. They also noted that it was this conflict and its explosive flashpoints that acted as one of the most pressing threats to elephant conservation.

The research article, published to the Journal of Applied Ecology and available on the British Ecological Society’s website, found that fencing can be used as “a solution to small-scale human-elephant conflict problems but [it] will not solve the issue at a broader scale.” Furthermore, it may both propagate the “overuse of habitat patches in other areas” and “increase the potential for HEC in new areas”.

Fencing has long been used by conservationists. Conservation’s intent is necessarily two-pronged. The first, and most obvious, of those prongs is the protection of wildlife and wild spaces. The second is building a world where human beings and wild animals can coexistent with minimal conflict.

Fences are effective in protecting human beings from the dangers posed by unpredictable animals. But, that often comes at a price.

This is the reason why we thought up our 10% fencing initiative. It is an attempt, still currently being trialled, to see if we can arrive at the pointed tips of each of conservation’s prongs.

The ‘Cry of the Kalahari’ case study: How damaging fences can be

‘Cry of the Kalahari’, for those who don’t know, is the autobiographical account of two American zoologists, Mark and Delia Owens, in their 7 years living in the Kalahari desert in Botswana.

Believing that soon their would be no wild places left in the world, the Owenses moved out to Botswana in 1974. With only the money they could drum up through the sale of their household belongings and some small savings, they started life in the bush. They hoped that whatever research opportunity they could find there would eventually attract the funding necessary to continue living there.

On the back of some interesting findings in the behavioural patterns of desert lion prides and the, as of then understudied, brown hyena, the Owenses did secure their funding and went on to live storied existences in Africa. If you haven’t read the ‘Cry of the Kalahari’ and are interested in conservation and wildlife, this story is an interesting account of life lived within one of the wildest places left to the earth of the 1970s.

One of the main reasons why the Owenses become quite so enthusiastic (and, as the story goes, not uncomplicated) conservationists is because of the effects of fencing that they witness first-hand in Botswana.

Under pressure from big ranching lobbies, the Botswana government sanctioned the erection of major fences that run through the Kalahari desert. Despite that there was then no evidence of foot and mouth disease’s presence in Kalahari wildlife, the fences were built to block transmission of this disease between wildlife and cattle.

Furthermore, there is no evidence to suggest that FMD can be transmitted from wild ungulates to domestic stock.

And yet, the fences were built, unsubtly and across an east-west bearing through the northern tip of the Kalahari game reserve.

In the 1970s, Botswana was home to the second largest wildebeest migration in the world. However, this fence, five feet of wire designed to block just these sorts of antelope, put an end to this magisterial mass movement. 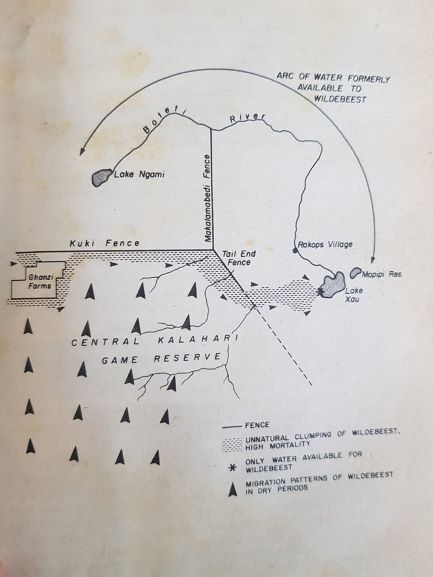 The wildebeest lived in scattered herds when they were in the desert. And the ungulates did not migrate en masse regularly. Certainly with none of the seasonal patterns as can be seen in the Serengeti’s blue wildebeest migration. In Botswana, the animals are only led north if they could no longer find water in the reserve and, at the end of the 70s, Botswana was bearing the burden of a several year drought.

The Owenses watched as the migrating antelope met with the huge east-west fence on their journey to Lake Xau. Genetic memory having informed them of the succour they would find there. At the fence, the wildebeest bunched up and died in their hundreds of thousands.

The real number of wildebeest deaths is impossible to quantify. However, some estimates suggest that, over the course of several mass death events between 1979 and 1984, 90% of the 1979 population are expected to have died. Many of the corpses were found in bunched masses tangled in the wire or piled atop one another.

The effect of fencing as bluntly-placed as this runs far deeper than simply providing a blockage. Mark Owens describes the composite effect of this fencing like this: “Thousands upon thousands of antelope that had been spread out over vast areas of the savanna were now forced by the fences to take the same migratory route to water. The grasses of the fragile rangeland were soon stomped and broken, ground into dust by the hooves of the first herds to pass. For those that followed, there was nothing to eat.”

The Kalahari’s wildebeest migration is no longer. Certainly not in the same way it could be witnessed in before the 1970s.

Fencing in conservation: if its to be used, it must be well thought out 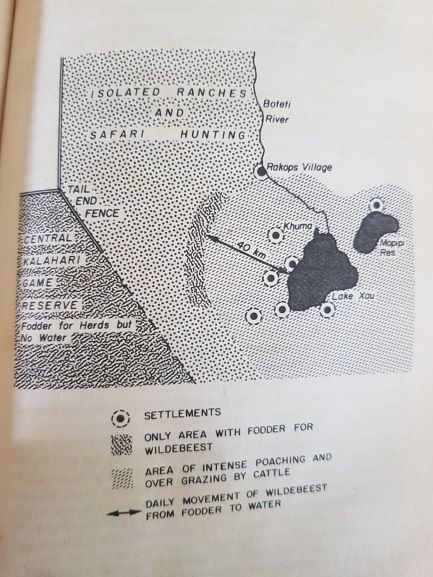 Fencing and its place in conservation cannot be condemned for this major mis-use. However, it does teach humanity an important lesson. Our actions have consequences that often and in the immediacy of our decision’s being made, we cannot see.

Those consequences can have disastrous consequences. If we are to do something to affect the natural world, think first, do our research and step sheepishly at the first. We are still learning the ways of the wilder parts of the world.