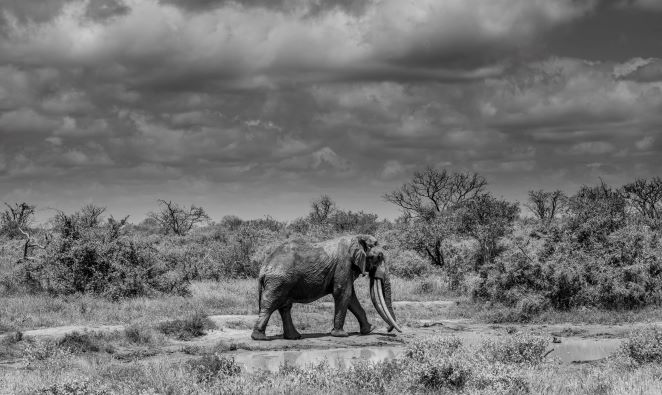 Regular readers of our online bulletins will know that the issue of human-elephant conflict is becoming one of the greatest threats to African elephant species. We have recently had the great pleasure of reporting on the continent-wide general downward trend in poaching numbers and, also, on the population increases in several African countries.

These incredible pieces of good news are a cause for celebration for many conservationists. However, the recovery of African elephant, and their reduced threat-level when it comes to poaching, does pose new concerns for those of us charged with safeguarding their welfare.

Human-elephant conflict: not unseen in the pre-colonial era but certainly now developing a different character

Researchers Peter Ngugi Kamau and Andrew Sluyter, from the Geography and Anthropology department at the University of Louisiana considered the case of human-elephant interaction in the pre-colonial era. They published their research paper, on insights gleaned through oral histories, in 2018.

Specifically, the Louisiana researchers considered the case of Tsavo and the peoples that have historically inhabited the area. Two centuries ago, the different ethnic groups that comprised what is now called the Tsavo Conservation Area practiced varyingly different modes of living.

Some were pastoralists, others hunter gatherers, still more had an adapted existence that was a blend of the two. Resulting from these different interactions with the ecosystem they were a part of, their interactions with elephant varied accordingly.

Hunter gatherers, such as the Waata people, were, according to an oral historical account, elephant hunters. They subsisted off a diet of elephant meat and honey. As an obvious result, the Waata had close and often conflictual contact with elephant.

Pastoralists, such as the Maasai, who, even pre-colonial incursion into the land, were on their way to becoming the most dominant human presence in the area, came into contact with elephant far less often.

The killing of an elephant was considered a bad omen by many Maasai. That is not to say that it did not happen. There are records of elephant parts use in Maasai medicine and as a food source. Understandable a development, one might posit, in an ecosystem affected by severe drought and food shortages.

As pastoralists, and nomads, the characterising description of Maasai-elephant relations was peaceful. One Maasai elder described it this way: “the Maasai are friendly to elephants. In the past, elephants and other, smaller animals occupied areas that we abandoned as we moved around with our livestock.”

From the oral histories, we can also see further evidence to suggest that the humans considered themselves a part of a working relationship with elephant. An Orma herder recounted that: “As elephants move through thick woodlands, they create trails which we use while grazing.” Furthermore, elephant were remembered to provide fruit for herders’ goats, by knocking them from trees, and firewood, again by knocking trees.

Elephant were only killed by herders when they posed a threat to livestock. Pre-colonially, this livestock moved often and, as a resultant, was less frequently at threat from elephant.

Elephant and human undoubtedly came into contact in the pre-colonial era. Furthermore, there are well-documented instances of that contact escalating into conflict. However, since colonial assumption of governance in the TCA, this relationship has changed massively.

There are a great many factors that have impacted the gradual, but accelerating, changes that make human-elephant conflict an increasingly prevalent issue.

Colonial government brought with it adapted attitudes toward land ownership and the mobility of inhabiting peoples. These attitudes, previously foreign to the area, became a legal code the foundations of which exist today. This, coupled with gradual attitudinal and legal changes to the treatment of wildlife, as well as population increase, climate change and continued food scarcity in the area, has resulted in a shift away from nomadic forms of existence.

Instead, now, what is more frequently observable in the areas that abound wild spaces, are settled farms. As stated in the Louisiana researchers’ report: human-elephant “conflict tends to arise wherever a majority of people living adjacent to conservation areas depend directly on crops, livestock, forest products, and wildlife for their livelihoods.”

If any of our readers have watched the BBC documentary, Dynasties, and it’s account of how this conflict is mitigated, they will know how fraught the human-elephant relationship can become. Farmers depend on the produce from their settled farms and elephant can be quite destructive if ever they come into contact with these farmsteads.

This dependence, the importance of it, makes these encounters quite emotionally-charged. The import of a farmer’s produce is exacerbated by food insecurity and drought in areas such as the TCA. Resultantly, landowners are often driven to desperation in the protection of their hard-won crops. They often use loud sounds to drive the elephant off. This can, in turn, make the elephant more aggressive and has resulted in deaths on both sides of the conflict.

Human-elephant conflict: the modern relationship and what can be done to mitigate against further conflict

Over the last two centuries, we have seen a drastic change to the relationship between human beings and elephant in Kenya. Where once the interaction might have been described as cohabitational, or even mutually beneficial, it is now one, definitely, of conflict.

As an increasingly problematic phenomena in the mission to conserve African elephant, mitigating this conflict is at the forefront of conservationists’ thinking. However, it is only recently that the focus has shifted from undermining poaching and the illegal trade in wildlife parts.

There is, resultantly, much that is in the consideration for the alleviation of this conflict’s worst expressions. Intelligently lain electric fences are one such solution, so too are fences of a more intriguing design. Beehive fences and fences made of foul-smelling substances have seen some successes.

Fences, of course, have a problematic history in conservation. They do protect human populations but, when they are indiscriminately lain, they also fragment already broken-apart wildlife populations.

Human fences, as seen in the Dynasties documentary, are also used. Human rangers put their bodies on the line, nightly, chasing away elephant herds while they throw firecrackers in an attempt to shepherd the creatures away from people. This is obviously quite labour intensive and dangerous.

It may be a while before we have decisive and actionable plans that will solve this issue. It may well be the case that several solutions are needed to mitigate against this conflict. Whatever the solution, rest assured we will search for it and, flush with the successes we’ve seen in subduing poaching, we’re sure we’ll find it.