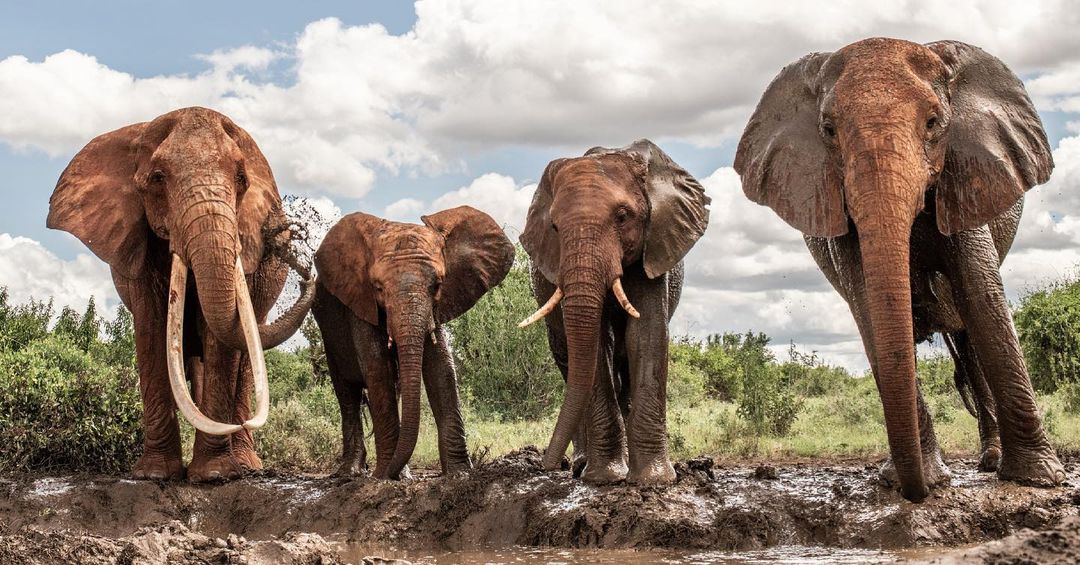 We hominids have had a recent taste of how a phenomena that is felt species-wide can impact the behavioural patterns we’ve long socialised by. The Covid-19 Coronavirus impacted us all and, in keeping us inside and affecting how we interact with one another, has had a varied and influential effect on our modes of being. Often in ways we could never have foreseen.

This lesson – taught at huge cost to human life and the freedoms we once held dear – should give us a little bit more empathy for the species we impact when we alter the natural order of the world.

Elephants are incredibly intelligent, sociable creatures with complex and varied communicative tools. Their societies are comprised of broader associations and smaller units that interact to different degrees in different parts of Africa.

Their social structures are responsive to the environment that they live in. Bigger herds tend to form in areas of plenty, and smaller herds in those of scarcity. Some elephant herds are known to migrate over huge distances in search of water, trusting in their senses and information passed through the generations. Other herds travel significantly less.

These complex creatures are adaptive, just as we humans are. They will change their behaviour if a threat or new challenge forces them too. And they can also have their behaviour, age-old and evolved to suit them best, changed by those threatening phenomena.

The Great Ruaha-Rungwa Ecosystem was once home to East Africa’s largest elephant population. It is also, unfortunately, heavily pressed by active elephant poaching. Using the distribution of poached elephant carcasses in the ecosystem, the TAWIRI team have managed to measure which areas deal with high-poaching pressure and which with low.

With this data, they have also measured the variation from the norm in elephant social group composition.

The group sizes in general were also larger in areas of low poaching pressure. This information, the researchers posited, strengthened that theory.

In areas of high elephant poaching, there were a higher proportion of bull elephant groups. The researchers suggest that these bulls were drawn together as part of a risk response strategy: a stronger together attitude of thinking.

The most conclusive finding from this TAWIRI research project was that the reproductive efficiency of elephant groups dipped in the GRRE in areas of high poaching. Shaped by fewer males in musth (a bull elephant’s state of heightened sexual awareness – which you can read about in greater detail here) higher calf mortality, fewer oestrus females and high stress on the social groups, reproduction dipped.

This is obviously worrying and, though the research doesn’t conclusively point this way, could promote a sort of synergetic worsening of elephant population decline in the GRRE. Poaching doesn’t just kill individual elephant, it also reduces a family group’s ability to produce and raise more.

These are worrying findings in themselves but they are made more so when we form this statistical breakdown into a narrative of events.

In Africa, between 1963 and 1989, poachers killed an estimated 86% of Africa’s elephants. This was before an international ban was placed on the sale of elephant parts in January 1990. Though that wasn’t the end of a problem that persists today, and is no consolation to the elephants that still lose their lives daily, in general, elephant poaching rates have dipped since the 1980s.

In her observations on elephant, Owens documented cases whereby female elephant of breeding age were hounded by many young bull elephant all anxious to mate. The young bulls chased the female. In their awkward and forceful attempts at copulation, the young bulls – who were often not fully grown and usually would not have the right to mate – mounted the young female one after the other. This event, described by Owens, was very distressing to the young female.

Owens suggests that in stable, normal elephant society this event would not likely have happened.

Usually, an oestrus female will be claimed by the oldest, most physically fit bull. In the bull’s claiming of the cow, he will guard the oestrus female from the young, impetuous would-be suitors. In so doing, the old bull both ensures it is his lineage that passes on and establishes a pattern of behaviour to the young bulls.

Owens suggested that both the female’s plight and the young males’ impetuousness would have been negated by the hierarchical system normally headed by a larger bull. In a normal Zambian setting, elephant reproduction had none of the chaotic, no doubt traumatising, lawlessness Owens witnessed.

In societies as complex and interactive as the ones elephants build, poaching does way more than simply end innocent lives.